Tziscao, is a name I can neither pronounce in English, or Spanish. This lake is part of a chain of lakes known as Lagos de Montebello, which is a stones throw from Guatemala. I had planned on making this my home base and sprouting out to the other lakes, however the weekend slipped away quickly. Despite reading many other blogs in both languages, it was really hard to get a good grip on the expanse of the area. I suppose that’s partly due to this National park being 15,840 acres and boasting 59 different lakes. So from the ruins I hopped in a van and headed to the lake! 😎

The van driver dropped me off at a lookout on the far side of the lake (in his defense I had just asked if he was going to the lakes of Montebello). The internet had crapped out on me a mile or two ago but my google maps was working offline and I could see the city, so it was ok. Despite repeatedly saying that I wanted to go the city, town or village, the driver wouldn’t have it. The van route goes directly through the village but everyone in the van was clucking about the situation so I gave up my ground and slung on my pack, almost forgetting to pay the driver. He charged me 20 pesos or $1usd and I thought I might cry when they drove away. Instead I had a few choice words with the wind looked over at the view and trodded off like a angry 7 year old child, scuffing my feet and kicking rocks. There really wasn’t room to walk on the road but I was in a stuborn mood until a young moto driver stopped and insisted on giving me a ride. He took me to the check point where I paid 35 pesos or about $2usd and I told him I was fine and thank you.

This is when I found myself warped back in time, to the village we lived in in Honduras. There was literally nothing here, no taco stands, or vendors, no-one selling fruit or corn, just a couple of small shops with very little inventory and some small closed restaurants. So I continued walking through town until I reached a place to stay with wifi. Unfortunately it was expensive at 400 pesos a night or $21usd, however with my own cabana, a huge extremely comfortable bed and a bathroom; weekend get away! 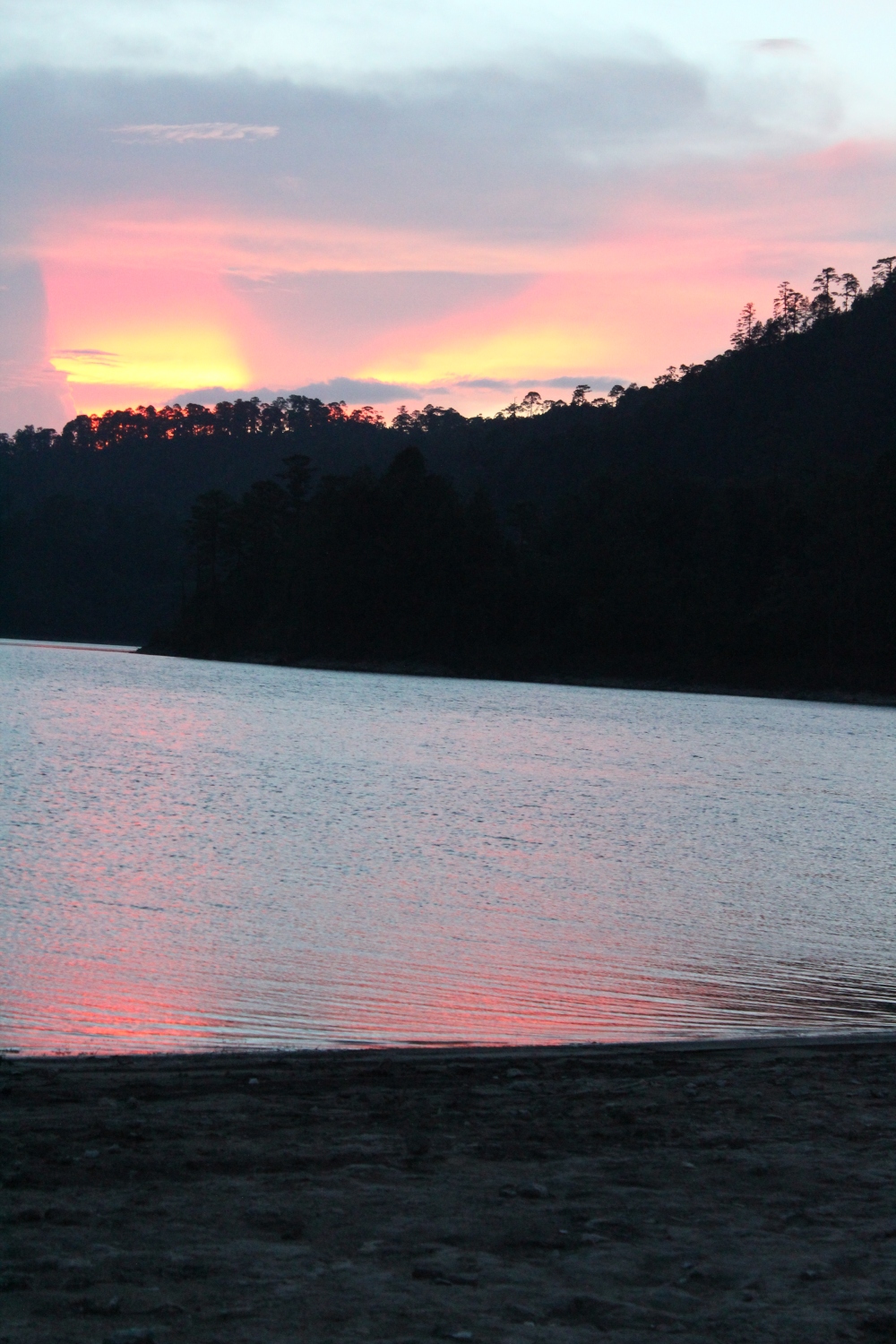 The lake was beautiful and the colors seemed to shift in different hues of blue constantly. However the rest of the day ended up being quite cold. The next day I decided to take out a kayak and head over towards the more remote parts of the lake. For 100 pesos or $5usd the kayak was rented for the day, it ended up being a tandem sit-on-top. I really wished I had a dry bag but chanced out anyways with my cell phone. After reaching the far side of the lake the wind began to pick up something fierce, so I made a smart move and started heading back. The shores of this particular lake are silty mud and thats what makes the colors so vibrant. It took three hours to return and the water was rough, with small white-capped swalls, walking in the knee-deep mud was not an option. The tandem kayak (sit on tops are really stable) slammed jaringly down over and over again with only half the weight in it. All I could do was keep paddling….

Exhausted upon my return but with no nap in sight, I headed out for a couple cool spots that had peaked my intrest that morning. Here is where I ended up at Lake International, that splits the border between Guatemala and Mexico. For a couple of brief minutes I just enjoyed Guatemala, long enough to stop for some Pupusas. Though they call them something else here. Having learned to make these simple cornmeal patted bean filled hot-cakes from a dear friend who originated from El Salvador (rip) they will always be pupusas to me.  While finishing my meal there was  a young lady repeatedly carry water from a very polluted creek, another reminder of the hard proud people of this region. After more exploring I found a trail near the farside of the lake and hiked around until it started to get dark.

The last day at the lake I thought I would do some more exploring, however I ended up sitting on a bench by the soccer field and reflecting on the lake. Of course this being a small village on a Sunday it wasn’t long until there was a soccer game struck up on the field. Being here in this small village as most of the occupants of the village turned up for the game, was a great end to my trip. I loved the village and the street kids who ran up to me and sang silly songs. I miss that third world feel, living in the city however all the amenities are convenient.